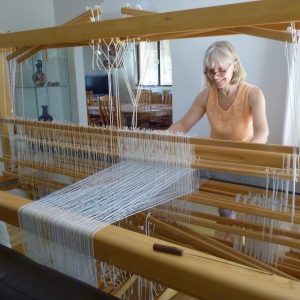 So here I am putting my first warp onto my new, very large loom and being amazed by how the unexpected and unplanned can happen and suddenly you are going down a completely new path.
I absolutely love my loom – my first one, that is.

It is a Saori floor loom, small, versatile, and so very beautiful. It is perfect. Just occasionally I want to weave something larger than the width allows, but a little creativity soon solves that.

But then I sat down for a moment and went onto gumtree for the first time in months. Without conscious thought I typed in floor looms. There weren’t many there, most of them ancient and dilapidated. But not this one. It stood out with it’s rich beech timber. Sturdy, solid and well loved – not a mark to be seen. But that didn’t excite me as much as the extras – wool. Bags and bags of glorious wool. In all my favourite colours. And books, and boat shuttles, and accessories I didn’t even know the names of. Still I did not give it more thought than admiration. But then I mentioned it to my husband. ‘Wow, buy it,’ he said. No, I don’t need another loom, where would I put it? And then I told mum ‘Buy it’ she says. Even dad, the sensible one said it. So I did.

I’m a true believer that some things happen for a reason. However we look at it, some things are just meant to be. I made the call tentatively, half of me knowing this was mad, and the other half suddenly desperately excited. Was I quietly hoping it had already sold or that it was still available? I honestly did not know the answer to that until Jen picked up the phone and we started talking. Then I knew I wanted it. And would have it, however hard it would be logistically to get it here. Just as some things are meant to happen, so too are certain people’s paths meant to cross. By the end of the call, I felt like I knew not only Jen, but her mother too, the weaver in their family. Jen is one of those truly lovely people that I instantly connected to.

After agreeing the purchase a problem arose. We live a good 6 hour drive away, so how to get it here? In a heartbeat she has offered to hire a truck (this loom must be big!) and drive it up to us. I’m an impatient person at the best of times, I can’t handle waiting for things so when she called back to say a truck was organised I asked when a suitable time would be for her. “On saturday” she said, “it’s all organised. We will leave early and make a weekend of it”

The loom was huge. There was only one spot in the whole house it could possibly fit. Behind the lounge. And oh goodness, I love doing puzzles but this was going to be quite something to build. My knowledge of large looms was small to say the least and we had no instructions. Actually that’s not true, we did. But they were printed over 50 years ago, in Swedish. I don’t speak Swedish unfortunately. “Ok, lets build it while it’s still fresh in my head” says Jen. By this time it’s 9pm or so, but together we assembled it, and unassembled it when we discovered critical mistakes 5 steps back. Photos she’d taken earlier, my husband’s problem solving skills and a good sense of humour ultimately turned it into a night to remember.

And during this whole time we chatted and chatted, so that now I still think of Jen’s mother every time I work on the loom, or look through one of her books or search for the perfect skein of wool on the shelves I bought to house it all on. Somehow I know this loom will be staying in our lounge room for a very long time to come.

Tags:
floor loom, learn to weave
Newer Off to School with my Trusty Loom
Back to list
Older My First Warp & the Forgiveness of Wool

END_OF_DOCUMENT_TOKEN_TO_BE_REPLACED

Off to School with my Trusty Loom

I was very privileged to be invited to Mater Dei Catholic School to spend a couple of mornings weaving with two young classes and introduce them to the art of weaving. After showing them the loom and how we use...

END_OF_DOCUMENT_TOKEN_TO_BE_REPLACED

I am one of those people who buys flat pack furniture and only opens the instructions when all attempts to work it out for myself have failed. I learn best through the doing and tend to dive into something and...