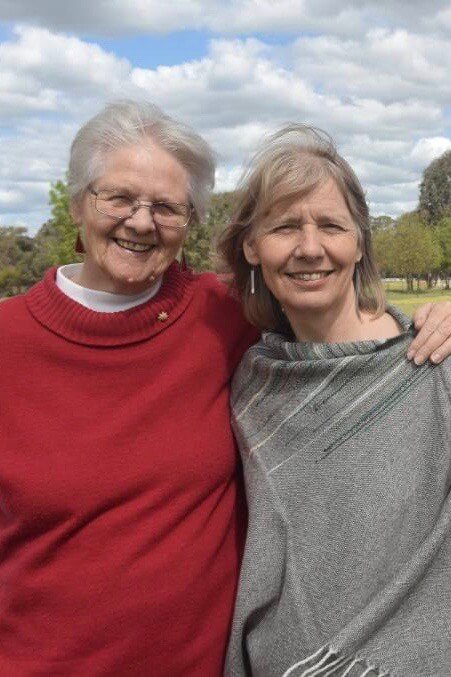 There’s no better way refocus on a person in your life than to have a stranger say just one word ‘wow’. I had this happen a few weeks ago when a journalist phoned to say she’d googled my mother. ‘Wow’, she said ‘she’s amazing, can I come and interview her for a story?’

The words weren’t a surprise to me because I know my mother and the life she has had and continues to have, but that knowledge has always been there, changing and evolving, like my own and everyone else’s have evolved and changed. My father’s life has also been an amazing one so maybe their stories are just a part of the life that I am lucky enough to lead.

The journalist came. And mum told her about her life, from working in theatre in London in her twenty’s, through to starting Ashculme Textiles, a new business venture, with her daughter in Australia in her 80’s.

I’ve told my mother more than once that I couldn’t do this crazy adventure of a business without her. And the words have always been true and sincere, but it was only when an outsider saw what was there that I started to think about exactly how true it was.

Certainly mum’s exquisite quilted work, that is now starting to appear in homes all over the area, plays a major role in it. But more than that, it’s the colleagueship of sharing ideas, bouncing them off one another and almost without exception having your own thoughts, good or bad confirmed. (“that’s a beautiful piece of weaving Fiona, but I’m not sure that bit you did the other night when you were exhausted does it any favours!”) That’s not to say we are the same, far from it. Mum loves all things bright and exuberant, rich bold colours and lots of detail, where I go for the soft muted earth tones, subtle, unstructured design and most of all making pieces that have a local story behind them.

Not just able to create with her hands, my mother is also a natural teacher. But in her daughter she has found the worst pupil. Even when I try something I have no idea how to do, something she knows like the back of her hand, I will be stubborn and determined to work it out for myself. She has learnt that I am not one of the many pupils she has worked with over the years. Ever tolerant, she will instead just subtly drop little nuggets of information and watch to see where it shows itself. Because it will, somewhere, at sometime. I will pick up that gem, keep it tucked away until it’s grown and matured and then run with it, maybe in the direction she expected, or maybe to somewhere totally different.

But that non-teaching started way earlier. I can’t even say when. Maybe when she let me help her pin a costume she was making, or maybe when I watched her paint a character she had to design for. Or the sewing box she bought me, or the little table loom. And maybe it was also in the respect of my creations. There was a little narrow shelf half way up the staircase in our cottage and long after I’d left home it was still adorned with a series of clay pinch pots I’d made as a 6yr old.

This is what I love most about sharing weaving now, especially with children. I am not really teaching them, I am providing materials, helping them to master the mechanics of the loom, and then watching and respecting the amazing creativity they discover in themselves. I have a lot of people walk in to a weaving workshop saying they are not creative. I’ve yet to have one walk out saying the same thing. We are all creative, we just need different ways and different opportunities to give it space to shine. Being creative with our hands nurtures something deep in us. Taking time to create a work of art, purely for the enjoyment of the doing, is so uplifting, not unlike a good healthy meal, it leaves us feeling replete and nourished.

Tags:
creative children
Newer Children work with fibre to turn a white fleece into a red scarf
Back to list
Older Off to School with my Trusty Loom