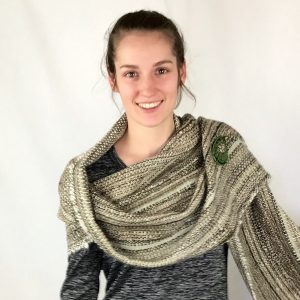 I am one of those people who buys flat pack furniture and only opens the instructions when all attempts to work it out for myself have failed. I learn best through the doing and tend to dive into something and think about it later.

And so it was with my first warp.

When I started weaving I would have gone to classes if any had been available in my area, but not having any was not going to stop me either. Instead I bought my first loom, sat down and started to play. The loom I bought was a Saori loom that has a pre wound warp that you can just slot into place and then thread through the heddles and reed. So I didn’t have to learn to warp before I got to weave. You get to play without the hard work first! But of course winding your own warp is always going to open up far more creative possibilities so I read through a few books and brought in the help of my mother who had had her own loom many years ago. Putting a bunch of threads onto a loom can’t be that hard surely! ​

​Sticking to one type of smooth thread would have been more sensible. Starting with a narrow scarf and not a wide throw would have been too. And maybe not 8 metres the first time either. But I was thinking result, not process. And I had a stash of gorgeous browns, greens, fawns and creams that would look stunning all randomly mixed together. Some were thick, some fine, some stretchy, some slub. All up I must have had at least a dozen different yarns. As I wanted a really random mix I wound them onto my warping mill 3 at a time. In case you don’t know – winding the wool onto the mill creates lengths of thread, each one crossing over the previous, so later when you thread it onto the loom you can easily follow the exact order that you wound. Winding 3 at a time is perfectly feasible as a thread crossing over with its immediate neighbour is not going to cause any problems. Unless of course you use a slub that catches on everything, or pre wound groups of fine threads being used as one, or yarn of varying stretchiness and strength. Oh, and a loss of tension that creates one almighty tangle.

There’s always more than one way to do something. On reflection sticking to one source of advice would have been more sensible. Tying the threads, feeding them one by one through the reed and heddles was fine. Just as long as I didn’t put the threads down for a second. Or snag the threads on jewellery. Or sneeze. Then the fun began. With a lack of tension the slub started to hook itself onto the smooth, the stretchy moved at a different pace to the non stretchy, the groups of thread being used as one refused to cross over with their neighbours. And I made the classic mistake of straightening or pulling the wayward threads. Seemed sensible at the time. But I read later, and it makes so much sense, doing that exacerbates the problem as you continue to wind. I do wish I’d taken a photo of the chaos at the back of the loom to show you.

I am also stubborn by nature and don’t give up easily. I was not wasting all that beautiful wool. So I persevered. Of course the tension was perfect once it was all tied up and ready to weave. Until I wound it on. Not too bad the first time, slightly worse the next. By the third time of winding it on I was wedging pieces of cardboard into sections of the warp to tighten it. Several times during the course of weaving I even resorted to unwinding the entire warp, stretching it out as far as the space allowed and rewinding back on the loom.

Then with a bit of trepidation the weaving came off the loom. I didn’t think it looked too bad with the memory of the mess still vivid. But still, I was not particularly impressed and was glad I wasn’t going to be tested on it.

No weave is complete without washing. So without too much sentiment I threw it in the washing machine, set it on a wool cycle and made a cuppa. That’s when the magic happened. While I sat enjoying a cup of tea. Out of the machine came a glorious throw (I was a little cautious and did one at a time), all the uneven tension washed away and smoothed out, soft, lustrous and delicate. It looked just like I’d hoped it would when I first picked out the yarns. It’s lucky I love to work mostly with wool. I’m not sure cotton would have been quite so forgiving. And lucky too that I manage to learn as I go along and have since managed to wind tangle free warps, which is a whole lot quicker and a whole lot more fun.

Tags:
floor loom, learn to weave
Newer How i found myself with a varpapuu loom in my lounge room
Back to list

END_OF_DOCUMENT_TOKEN_TO_BE_REPLACED

Off to School with my Trusty Loom

I was very privileged to be invited to Mater Dei Catholic School to spend a couple of mornings weaving with two young classes and introduce them to the art of weaving. After showing them the loom and how we use...

END_OF_DOCUMENT_TOKEN_TO_BE_REPLACED

So here I am putting my first warp onto my new, very large loom and being amazed by how the unexpected and unplanned can happen and suddenly you are going down a completely new path. I absolutely love my loom -...